“I just sit at my typewriter and curse a bit” – P. G. Wodehouse

A one-to-one tutorial proved very insightful this week, providing me with a much clearer vision of how to move my project forward. Feedback was highly informative and will be invaluable as research continues.

It was very interesting to explore the different meanings that can be attached to an image by an audience. Frith’s “layered” method of analysis, looking at surface, intended and cultural meanings of advertisements, resonated with me considerably – I really connected with this. This is one theory that I can see myself putting into practice as I develop my images on a regular basis.

Francis Hodgson suggests that we frequently refer to images as being “of something” but rarely consider that images are also “about something”. Barthes semiotic analysis, in the Rhetoric of the Image, informs us that there is in adverts both the “signifier” and the “signified”.

For me, for these two concepts, posited by two theorists at different times and for different reasons, to link together so well is intriguing – essentially two theorists reaching the same conclusion and expressing it in unique terminology. I found the “convergent evolution” striking. (Wonder if Hodgson ever read Barthes?) The interchangeability helped cement these concepts in my mind.

In fact, the deeper into semiotics and the encoding and decoding of images I delve, the more interesting I find the subjects. From a photographic point of view, these are areas that I could see myself exploring at some point. But that point certainly isn’t right here, right now. Today, and for the foreseeable, my focus needs to be my project, certainly if I am to do justice to both the project and any (very) tentatively formed ideas I have to investigate semiotics and related areas. Hmmmm … lots to think about!

Visual anthropology entered the conversation this week. I can see potential for lots of projects in this area (wonder what an electroencephalograph would look like right, so many ideas being fired off). But, isn’t all photography a form of visual anthropology in one way or another?

A fair amount of time this week has been spent researching the work of autodidact Bill Gekas. It’s fair to say I’m enchanted by his work which, both interestingly and relevantly, is inspired by the work of the “old masters”. 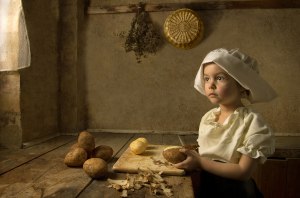 I’m very pleased with one particular image taken this week, “Bloodshot”. This image was made especially for an activity in which a “new” image – meaning one that had not been previously viewed by any fellow students – was posted to a forum devoid of any accompanying explanatory text or caption. The viewer was to make their own meaning. This photograph was actually a lot of fun to make. I like the composition, I think that turned out well and is visually appealing, and I like the overall ambiguity of the image – the image is clearly “of” something, but what is it “about”? (Hodgson again!)

One thought on “On Reflection: Week 4, Module Two”