“Photography can only reveal the surface of things” (Ruff in Dorment, 2003). To find meaning in Cramer’s work we have to look, we have to search because, without doubt, these images are packed full of content. We need to scratch to reveal that which is beneath the surface.

Daniel Gustav Cramer’s “Trilogy” is an exhibition in three parts.

“Woodland (Trilogy Part One)” exhibited in 2004 and is a series of images which capture woodland landscapes. Nature moves very slowly – minute changes being made incrementally over a long period of time. Consequently, it is not the element of “freezing” a moment in time that Cramer brings to the subject, because, from our point of view, nature is pretty much “frozen” anyway. What Cramer’s photography does bring is a sense of nature having been left untouched by human intervention.

Interviewed by Chiara Parisi for Klat Magazine in October 2010, Cramer states that one intent behind his work is that of it being an archive. However, he goes on to say that whilst the archive is a “concept”, it is also merely an initial idea, a point from which his work can grow: “the concept is rather a starting point from where I can freely explore the potential that has been laid out” (Cramer, 2010).

Speaking more specifically about the “Trilogy” exhibition, Cramer points to the documentary value of his work:

“These days I probably spend an hour a day researching on YouTube and other sources into what is happening in the Gulf of Mexico right now. The worst thing, next to all the fatalities in the animal world, is that BP is not questioned or criticised. The media accepts things as they are.”

He goes on to state “Using photography to document nature as an abstractum is working so well.”

So, how can we, as viewers and photographers, interpret Cramer’s work? 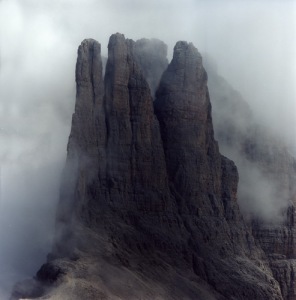 Frith (1997) suggests that there are three meanings associated with an image, and that these operate at different levels.

The surface meaning, the overall, initial impression obtained upon viewing the above image from Cramer’s “Mountain”, shows towers of rock which appear to show sedimentary layers. The rocks are surrounded by swirling mist, possibly cloud.

The intended meaning is what the photographer wishes to portray – this is the “preferred” meaning, the way in which Cramer “expects” viewers to interpret an image. Here Cramer is trying to portray a feeling of isolation in nature, but it is not an isolation that excludes the viewer, rather the ambiguity of exactly what it is that the viewer is looking at draws the viewer into the image.

Finally, the cultural meaning. The interpretation of this meaning is dependent upon the cultural knowledge and social background of the viewer. Cramer is showing us that much of the natural world remains unchanged by human activity, and in doing so reminds us of the great harm that is done when human activity does take place. He is providing a socio-political commentary in addition to documenting some of the world’s more remote places.

In semiotic terms, the rock towers are indexical in that they are providing direct evidence of this piece of landscape having existed, whilst the rock towers may not always exist, Cramer’s image provide trace evidence of their existence. Furthermore, the rocks are symbolic of the ruggedness of nature, of its ability to endure and, in cases where human’s drastically change a landscape as a result of their activities, to reclaim the “land” once human occupation has ceased.

Barthes (1977) makes reference to the signifier, something which is identifiable in an image and which conveys a denotational message, and the signified or the connotational (implied) meanings, ideas or ideologies which an image attempts to communicate to the viewer.

With reference to Cramer’s image, the signifiers are clearly the rock towers and the swirling mists. The signified could be an order, within a randomness, within an order. Natural objects, trees for example, are unique – it is a basic requirement that trees have leaves, but no two trees will have the same leaf arrangement – and this is due to randomness. Despite this, trees still conform to a basic body plan – a form of order – and it is this which makes trees recognisable as such. Alternatively, the signified could be the simple beauty of the natural world which is captured by Cramer’s abstract images, or it could be Cramer’s intention, by contrasting that beauty, to remind us of the damage we, as humans, do to the natural world in order to make it more “hospitable” for us as a species.

Again, it is this sense of ambiguity which makes Cramer’s images so appealing.

Something which is very striking, devoid of any artefacts of human existence, it is impossible to apply any sense of scale to the subjects in the Cramer’s images, despite the subjects themselves (trees, rocks, etc.) being easily recognisable features of a natural landscape.

Hodgson (2013) points out that we are familiar with discussing images as being “of something” but not so adept at seeing that images are also “about something”. For me this is a fundamental point in the analysis of any image, accepting that we have to keep looking until we see.

In terms of my practice, Cramer’s “Trilogy” illustrates the importance of understanding the reason for embarking upon a particular project, of having a “roadmap” to clearly define the starting point and the intended destination. It is so easy to become side-tracked during a project, especially a major project which is developed over a protracted period of time, and in so doing lose a sense of purpose or identity. Understanding the reason, the “intent” behind a body of work helps to maintain focus.