Compiling a resolved body of photographic work for an examinable portfolio is an emotive process.

In terms of choosing the images, it is easy to let technology interfere in the process. Culling a certain number of images from a series can become a monotonous task, and the internet makes it too easy to make a few clicks and start to research some aspect of the next project. Printing out small copies of each image gives me something tangible to work with. They can be shuffled like a pack of cards to see what works. They can be pinned to a wall, the order changed around, and most importantly, I can step back to view the images from a distance and gain a feeling of which images work together well, and which don’t.

Intuition plays a part in image choice Some images “resonate” more than others when the shutter is operated. “Sam” is an image which immediately resonated with me: it’s a strong image which benefits from a simple composition, a relatively limited colour palette makes effective use of orange and related hues and provides cohesion throughout the image.

It is important to find a theme which runs through the series of images and which can provide a narrative – the storytelling ability of the images as a whole is important. It isn’t enough for the images just to be “strong”. Ten images which demonstrate my style and collectively tell a story are better than 20 images which portray a disparate variety of different subjects.

Images for my Work in Progress Portfolio submission have two themes, both of which explore our relationship with food.

“Eyeholes, earholes and …” is taken from the series ““Junk” Food” which focuses on some of the social issues associated with our food and the way we consume it.

“Chloe” is an image which has a visual anthropological dimension, recording the meals consumed by “Ten” schoolchildren on the evening of 7th March 2017. 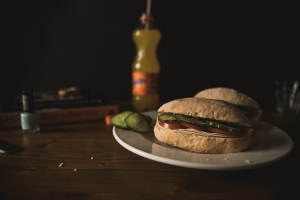 Having initially decided on twenty images, I found it invaluable to have the assembled work reviewed by as many people as possible. This helps to offset any personal likes or preferences, it prevents any “conflict of interest which might arise from a strong attachment to any one specific image.

Each reviewer provided a different perspective, and in several cases the opinions conflicted. This is an inevitable part of this method. It is also absolutely necessary – if every opinion provided agreed, what would be the point?

What I was looking for was similarities in the opinions, some sort of common thread running through all the comments.

Moving forward, areas to investigate include the context in which images are viewed and the interaction between the two, the curation of images, and viewer management.