What are we actually saying when we operate a camera shutter? What statement are we making?

The very act of framing a picture places a photographer in a position of power.

What is included? What is not? Why? And how?

How many people contemplate photography?

Most people, I suspect, regard operating a camera, pressing the shutter, as a simple process. And it is, on a purely mechanical level.

I think the implications of taking photographs escape most people, by that I mean that a significant number of images are generated without any prior consideration. Little, if any, thought is given as to why the image is being taken, or to the value of the image.

But at what cost are images made?

Are the images obtained ethically? Has appropriate consent been obtained? Have trespass laws been broken? Do the images show classified information? Have models been exploited?

I think the same rules do apply, but are not perceived to apply.

Arguably, even the best photographers are only as good as their reputation – controversy is not normally a strong selling point (although of course there are exceptions to this).

‘Left almost untouched (except for the planting of trees and green areas) since the Nazi forces left the site in January 1945, the site is now a museum of global importance.

Each block that you visit on the site has a specific part to tell about the story of the events that took place there. The rooms where the victims’ belongings were displayed were the hardest to visit.  The photographs on the walls appear almost banal.  They do not show the true horror that happened. The subjects stare at the camera, or look elsewhere; no violence or death is depicted.

Looking at the suitcases, shoes and human hair left us without words. But not everyone on the tour reacted that way.  Many were happily photographing every aspect they could, taking selfies to show that they had been there. Philip and I discussed later how disrespectful and shocking to us this act was.

The human hair preserved in a darkened room was used by the Nazis to produce socks and carpets.  It is strictly forbidden to take pictures in this room, as it should be out of respect for the victims.  It is a sad sign of our times, that this even has to be specified on large signs at the entrance.  Yet, there are people who sneakily take shots in this room.  I do not understand how anyone would think it was appropriate to take images in such a place.

This prompted a long discussion between myself and Philip later in the day about Auschwitz and photography’ (Sutherst, 2017).

There are ethical and moralistic obligations attached to the way we take images, and to the way those images are ultimately used. 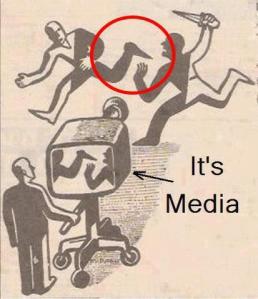 The cartoon It’s Media illustrates how images can be used to fulfil an ulterior motive.

The cartoon shows how a situation has been manipulated to produce a fictional reality, in this case by taking an abstract and removing the context.

It also makes reference to the fact that our views can and are changed. Sometimes the change is informed, but not always. Sometimes, we seek to change our views proactively (self-improvement, for example), on other occasions the change is made for us – for example, as a result of the way media reports news, or by skilful marketing which uses psychology as a basis.

What is the relevance of this to my photographic practice? Ultimately, I am concerned that my images present a true and fair view. I want to be regarded as a good photographer, both technically and artistically (whilst bearing in mind that my work will never appeal to everyone).

The question I pose myself is this, is it possible to produce images which have a narrative, whilst also being unbiased and objective? For me, this largely comes down to two things: research – knowing the subject, and personal integrity.

This brings me back to my two original questions: what are we actually saying when we operate a camera shutter? What statement are we making?

I believe that when we photograph, we are making a statement about ourselves, and our motives, and our beliefs, and our culture.

But as photographers we have an obligation to ensure that what we present has some objectivity, unless of course we are intentionally creating escapist art, i.e. fantasy or science fiction art. If we are not in complete control of how our images are used, we can control the integrity of ourselves and our subjects.

As seems to be the case at the moment, this tends to generate more questions, than it does answers.

What am I trying to represent? And why? Who is interested? Is anybody interested? Is there a point at which a psychological divorce takes place between a viewer and an image, in terms of visual appeal, if that image is obtained unethically?

We live in a world where, perhaps more increasingly, we need to ask ‘why is this person telling me this? But shouldn’t we be asking ourselves this question on a regular basis anyway? Because the alternative is that we blindly accept everything we see and hear? And at the very best, that leads to stagnation and, arguably, at worst to prejudice.