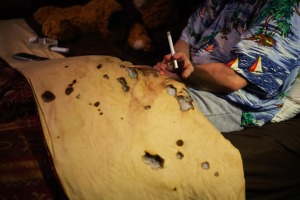 Melissa Spitz’s You Have Nothing to Worry About describes the tumultuous relationship between her and her mother.

From her earliest memory, her mother has suffered from mental illness and substance abuse. The diagnosis of her condition frequently changing from one of alcoholism to dissociative identity disorder.

This has led to the breakdown of her parents’ marriage, and a relationship between mother and daughter which is resentment filled.

You Have Nothing to Worry About is described by Spitz as a ‘complex and difficult body of work’, having images which, she informs us, are ‘simultaneously upsetting and encouraging, honest and theatrical, loving and hateful’.

For me, the images have a richness, but also have a repellent quality. I oscillate between wanting to view the images on one hand, and not wanting to view them on the other. The images in this series contain a punctum (Barthes, 1980), a detail which ‘pricks or bruises’ the viewer’s consciousness, evoking a sense of emotion.

Spitz’s work is significant to me for the way in which it is approached.

Firstly, she has considerable self-awareness of how she interacts as a photographer with her subject

“There was never really a conscious decision of going to photograph my mentally ill mother,” says Spitz, yet, in the shadow of the stress, her lens became a mechanism through which she communicated with her family. “It was the easiest way to give me a reason to go home but still be separated from the situation, via the physical act of putting a camera up in front of my face,” she explains (Richter, 2015).

Secondly, Spitz appreciates the impact of her intervention as a photographer upon the subject.

I am fully aware that my mother thrives on being the center of attention and that, at times, our portrait sessions encourage her erratic behaviour’ (Spitz, 2018).

Jo-Ana was different. The moments in time upon which the still life images were based were already fixed, immutable. The subject’s thoughts were already captured in a diary and could not be influenced by the act of my photography. Each outcome had already been determined.

I propose a future project investigating alcoholism. This will be different again, placing me closer to the situation in which Spitz finds herself – a position of being able to influence the perceptions held by subject’s regarding their circumstances.

Molloy (2018) states that a key question when producing participatory works is ‘what difference does it make having me being part of the story?’

Pauwels (2011) suggests that participatory productions place the social scientist in the position of participatory facilitator, and that research is conducted ‘with’ and not ‘on’ participants.

I think that, for me, this is the point to take away from Molloy’s presentation – to engage without influencing, to present a true and fair view.  In essence, ensuring that conceptual and practical filters which can be applied as a result of pre-knowledge and associated underlying assumptions (Walmsley and Johnson, 2003) are eliminated.

Spitz, M. (2018). ‘You Have Nothing to Worry About’. Melissaspitz.com [online]. Available at: http://www.melissaspitz.com/you-have-nothing-to-worry-about/z87g2l8cgzvsfsedduq4v1chwd1hqg (accessed: Monday 25 June 2018)